Sirisena has received USD one million (Rs. 190 million) by a foreign force to facilitate the detonation of the Easter bombings 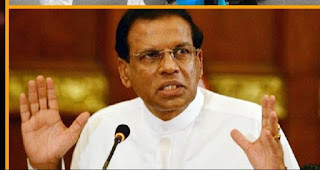 Reports reaching Lanka e news confirms the then head of state, Pallewatta Gamaralage Maithripala Yapa Sirisena has received USD one million (Rs. 190 million) by a foreign force to facilitate the detonation of the Easter bombings and to conceal information about the real culprits behind it.

It is further reported that the final transaction of this amount was made in full in Singapore on the day of the bombing and that Maithripala Sirisena's delay in arriving in Sri Lanka from Singapore on that day was due to the fact that it was essential to stay in Singapore until the conclusion of the this transaction.

It is reported that Thilina Suranjith, the official husband of Chathurika Sirisena, the son - in - law of Sirisena who mediated this deal, had made the final deal on a luxury cruise ship anchored in the Singapore seas.


If the present Rajapaksa government genuinely wants to find the truth about this we are ready to help. That is by exposing with whom Sirisena hid the money.

With whom Sirisena hid the money..
One of the main person who hid the bribe money obtained by Maithripala Sirisena for facilitating the Easter bombing and hiding its real godfathers and various other corruptions is in the accounts of a man named 'Indika Samarasinghe alias Japan Indika'.

Friendship of Maithripala Sirisena and Japan Indika develops into a great trusted friendship when Japan Indika supply mistresses to president Sirisena at Japan Indika’s Royal Park safe house. The luxury bed mattress in Indika's bedroom would testify how many times Sirisena’s mistress 'Anuradha Jayawickrema' came to this house. In addition, Indika has been involved in the pimp work of supplying Japanese women.

Sirisena, who develops friendships through fraudulent activities, has given Indika Samarasinghe alias Japan Indika, peoples electronic frequencies worth millions of rupees, as if owned by his parent’s. Japan's

On April 6, 2018, the rest of the UNP cabinet ministers met Maithripala Sirisena in a fit of rage, demanding that the six SLFP ministers who were already in the cabinet and voted against the government for the defeated no-confidence motion against Ranil Wickremesinghe's government be removed from the cabinet. It is important to recall the furious statement made by Maithripala Sirisena.

"If I am to go I shall set fire to everything before that" Maithripala said at the time. Didn't he do as he said?

Lanka e News has received very sensitive information about the masterminds of the Easter bombing. We are analyzing them with our expert analysis. If the official inve
My 3