authorities of the Gampaha District Hospital on Saturday, to carry out repairs to long-standing problems 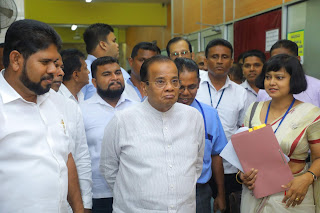 GAMPAHA:  Western Province Governor, Hon. A.J.M.Muzammil instructed  the authorities of the Gampaha District Hospital on Saturday, to carry out  repairs to long-standing problems urgently while giving priority to the central air-condition system of the hospital, fire protection, water leakage and replacement of the old lifts with new ones  ( escalators ) of the hospital.
He made this statement during an inspection visit to the hospital in Gampaha  on Saturday. Chairman of the Western Province; Provincial Council; Sunil Wijeratne, former Chairman Gampaha Pradesha Sabha and  Chairman Provincial Council Road Development Authority, Ajith Basanayake  and Parliamentarian  Lasantha Alagiyawanna were also present.
Following a tour to various facilities of the hospital, Muzammil lamented that various repairs could have been done in time without patients having to suffer. “ We cannot afford to delay these repairs since this can affect human lives,” Muzammil said. The governor requested the hospital authorities to call for quotations for the purchase of three new lifts to the hospital and also for the repairs of the central air-condition system, fire-fighting systems and solutions to  water leakage problems from roofs and buildings . Muzammil also said that he would call for a technical report from the Moratuwa university about the safety of the hospital buildings to decide further action. He further said that he would cooperate with the health authorities to complete these works without any further delay.
The governor pointed out that there is no need for the provincial council to hand the hospital to the central government since our priority is to carry out these repairs by the provincial council without further delay.
Answering a question from the press, Muzammil said governors are appointed to various provinces by the President without any consideration to caste ,creed or religion. The President will always look for a person who will dedicate himself to work for the welfare of the people, the governor noted.
Earlier in the day, the governor also visited the St. Lucia’s College in Kotahena. Muzammil found that one of the buildings was in a dilapidated condition which is harmful to the students. He called for urgent repairs of the building and told the authorities that it is not safe for the children to study under such pathetic conditions.