SLMC have been split over the Muslims in Kalmunai today for the sake of their voter turnout. 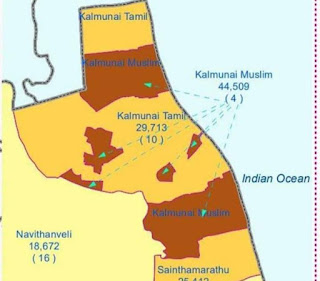 In fact, if the Muslim Congress thought to solve the Kalmunai issue, it would have been resolved.
The Kalmunai Sub-Secretariat was created by the LTTE in 1989 and forcibly incorporated Muslims and their lands without their opinion.
This was possible due to the lack of power of the Muslim Congress during that period.
But in 1994, the SLMC  came to power. The power has to change the Kalmunai bus stand to new place. By then, this sub-DS office was not canceled by a cabinet paper or it could have been created the GS for Kalmunai town which 99 % muslims' land there and included to the Kalmunai Original DS.   Or it could be divided as it was before 1987. But nothing done.
The Muslim Congress was in the cabinet from 2000 to 2001 and 2003 to 2006. This may have been done through a single cabinet paper.
After all, Mahinda Rajapaksa was supporting muslims may have been pretty  good at the end of the war. But slmc didn't try to solve it.
The SLMC and the Tamil Alliance ruled the East in the Eastern Provincial Council. The two parties may have settled the matter by then. Even the Tamils ​​have not tried to solve the Kalmunai issue.  Why? They also had the intention of deceiving Tamils ​​through the anti-Muslim  politics. The same was also  Muslim Congress.
These problems was raised by a request of Sainthamaruthu Council. Since the SLMC was in the Cabinet at that time and the TNA's support to the government, the issue could have been resolved through a cabinet paper that would have sorted out the issue as it was the boarder much earlier in 1987.
That is where the stability of SLMC's fraud, deception and racist advocacy lies.
Overall, the Tamil and  Alliance (TNA) and SLMC and TNA have been split over the Tamils ​​and Muslims in Kalmunai today for the sake of their voter turnout.
- Mubarak Abdul Majeed
Ulama Party leader