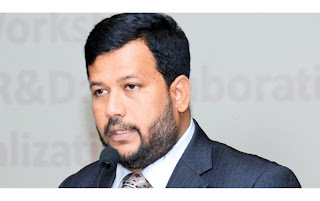 In the wake of political allegations against him in the aftermath of April 21 bombings, Leader of ACMC,  Sri Lankan Minister Rishad Bathiudeen has called for a Parliamentary Select Committee to clear his name. ‘The people who make allegations against me knowingly or unknowingly safeguard the real terrorists’ said Minister of Industry and Commerce Resettlement of Protracted Displaced Persons, Cooperative Development, Skills Development & Vocational Training Rishad Bathiudeen addressing the Parliament on the evening of 10 May.

“Various people made allegations against me saying I ran away from Sri Lanka when I was recently for official work. Some people and media made these allegations. They made the allegations without checking the facts about this tour.  With some other Ministers in Oman, we discussed about multi-billion rupee project for Sri Lanka with Omani government officials. After I returned from Oman, they have stopped the allegations. They also aimed other allegation against me and these allegation were so dangerous and insulting I had question back from certain media institutions as to why they are identifying myself with terrorists” said Minister Bathiudeen and added: ‘These allegations too were similar to the allegation that I ran away from Sri Lanka. These allegations had no basis, nor were supported by facts. SB Dissanayake holding press conferences lies in this regard. I have taken legal action against him. Since  I did not accept his invitations during the 52 day coup, taking revenge from me in this way is playing cheap politics. However I want to stress that I have given my assets and liabilities statements since the day I entered politics. Anyone can inspect these statements. I am also ready face any investigation. Today I call Hon Speaker to appoint a Parliamentary Select Committee (PSC) to probe on  allegations made against me. Then we can find out who is lying and who is not. Therefore I call speaker to immediately appoint a PSC to investigate this. The people who make allegations against me knowingly or unknowingly safeguard the real terrorists and fundamentalists. Their actions results in myself highlighted while the attention on the real terrorists shifts. We are strong believers of Islam. Allah does not approve terrorism nor fundamentalism.   I am profoundly shocked of the loss of lives due to this terrorism and fundamentalism. I express my condolenes to the dead. I wish speedy recovery for the injured. I bow my head with gratitude to all who committed for peace and reconciliation at this difficult moment.”

By aljazeeralanka.com January 20, 2020
The Founder President of Sri Lanka’s  Confederation of Micro, Small and Medium Industries (COSMI) has been appointed as the Co-Chairperson of the   London based Global Peace Institute (GPI)   which conducts interdisciplinary research in several thematic fields including international relations and politics. By this high profile appointment made on 15 January, GPI seeks COSMI  Founder President Nawaz Rajabdeen’s  contributions to improve its training and research efforts. GPI is a think tank run by the UK based Global Peace Ins. (GPI) CIC, an independent non-profit, non-governmental organization. GPI works for global peace and resilience through peace education, dialogue, training, creating awareness and research. COSMI  Founder President Rajabdeen, as an honorary member, is also tasked by GPI to  promote its programs, add value to research work, and also will be required to attend various GPI events. “I am thankful to GPI for enlisting me for their ongoing and vast efforts” sa
Post a comment
Continue reading