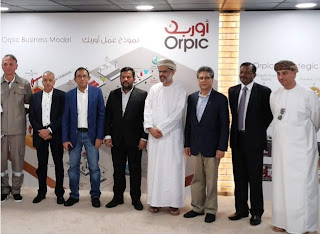 Oman, host to a fast growing free port in the world, and a key gateway to Gulf Cooperation Council (GCC) has proposed a Joint Commission with Sri Lanka to advance present bilateral trade to new levels.
During his meeting with the Sri Lankan Ministerial delegation on 6 May in Oman, the Omani Commerce and Industry Minister Ali Bin Masoud Al Sunaid proposed an Oman-Sri Lanka Joint Commission could boost bilateral trade beyond current volumes. Omani Minister Al Sunaid was meeting Sri Lanka’s Minister of industry and Commerce Rishad Bathiudeen joined by Minister of Development Strategies and International Trade Malik Samarawickreme and Highways Minister Kabir Hashim in Oman on 6 May. Sri Lankan Ministerial delegation to Oman is a follow-up to the Colombo meetings of Oman's Minister of Oil and Gas is Dr Mohammed bin Hamad Al Ruhmy in late March 2019. It was also agreed that the Joint Commission is to be headed by Ministers at both sides.
At present, total annual two-way trade between Oman and Sri Lanka averages around US $250 Mn. Around 85% are imports from Oman, consisting of petroleum products, light oils, polymers/plastics, and aluminums. Among Sri Lanka’s key exports to Oman are desiccated coconut, tea, fresh fruits, vegetables, nuts and seeds.
Both Ministers- Minister Bathiudeen and Omani Minister Al Sunaid – on May 6 also agreed to speed up the finalising of mutual Agreement on Promotion and Protection of Investment between both countries.
As part of Oman Oil Refineries and Petroleum Industries Company’s (ORPIC) downstream output presentations, the Lankan Ministerial delegation was also given a tour of the plastic manufacturing sub-zone of Oman’s Sohar Free Port and Free Zone on 5 May.  Sohar is Oman’s joint venture with the Port of Rotterdam and this is one of the fastest developing port cum economic zones anywhere in the world. Sohar zone is more than 11000 acres (4500 hectares).
Dr. Mohammed bin Awad Al Hassan, the Acting Undersecretary of the Foreign Ministry for Diplomatic Affairs of Sultanate of Oman, meeting Minister Bathiudeen in Colombo on 6 April 2017, invited Sri Lankan exporters to invest in Sohar and make it “Sri Lanka’s main manufacturing and re-exports base in the Middle East”.  “We are encouraged by the fact that our products can reach more than 13 billion Middle Eastern customers through Oman” responded Minister Bathiudeen to Omani Acting Undersecretary Mr Al Hassan.
In 2017, The GCC’s logistics market is estimated to be one of the fast growing sectors at a valuation exceeding US $70 billion, with Oman playing a lead role in it with Saudi Arabia and UAE.

By aljazeeralanka.com January 20, 2020
The Founder President of Sri Lanka’s  Confederation of Micro, Small and Medium Industries (COSMI) has been appointed as the Co-Chairperson of the   London based Global Peace Institute (GPI)   which conducts interdisciplinary research in several thematic fields including international relations and politics. By this high profile appointment made on 15 January, GPI seeks COSMI  Founder President Nawaz Rajabdeen’s  contributions to improve its training and research efforts. GPI is a think tank run by the UK based Global Peace Ins. (GPI) CIC, an independent non-profit, non-governmental organization. GPI works for global peace and resilience through peace education, dialogue, training, creating awareness and research. COSMI  Founder President Rajabdeen, as an honorary member, is also tasked by GPI to  promote its programs, add value to research work, and also will be required to attend various GPI events. “I am thankful to GPI for enlisting me for their ongoing and vast efforts” sa
Post a comment
Continue reading