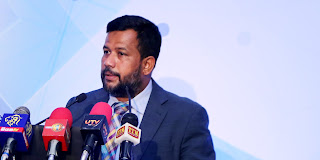 In the wake of the deadly Easter Sunday bomb attacks that claimed 290 lives across the country,  All Ceylon Makkal Congress (ACMC) called Sri Lankans to move for collective actions together and not to fall into a new conflict at a time when the tenth anniversary of the end of previous conflict is just around the corner.

“Sunday 21 April 2019 will go down in Sri Lanka's history as one of the worst days that we woke up to. It was a very sad day for all citizens of Sri Lanka and our reconciliation process that we are striving to accomplish despite many obstacles” said the Leader of ACMC and Minister of Industry, Commerce, Resettlement of Protracted Displaced Persons, Cooperative Development, Skills Development and Vocational Training Rishad Bathiudeen on 22 April and added: “A well-coordinated attack on faithful Sri Lankan Christian worshipers and foreign tourists resulted in more than 200 deaths and many other wounded casualties, though these victims had no role in creating any discord with anyone. They sacrificed their lives for an agenda of suicide bombers from an extremist faction. Their actions brought the country to great disrepute, while shocking all other Sri Lankans, and the rest of the global community.  ACMC unequivocally condemns these heinous and barbaric acts committed on Sri Lankan and foreign citizens. ACMC is very saddened on the latest developments in our peaceful country. It is very clear that these attacks have been planned well in advance. We call the authorities to trace all the criminals and their networks responsible and also call law enforcement to punish them, regardless of their gender, age, ethnicity, nationality, rank, and file.  It is important to note that next month Sri Lanka commemorates the tenth anniversary of end of three decades of war that concluded in 2009 May. It is clear that whoever were behind these attacks, also aimed to seriously disrupt the continuity of peace in the country that emerged after three decades of war.

Therefore ACMC calls for restraint from animosity and forgiveness. ACMC also calls for  collective actions –both in reconciliation and rapprochement- by all citizens of Sri Lanka regardless of ethnicity or religious affinity, to prevent our country falling back to another conflict just as we approach the tenth anniversary of end of the previous ethnic conflict. Let us all courageously stand up to safeguard our mother Lanka against any religious or ethnic violence or disharmony.”