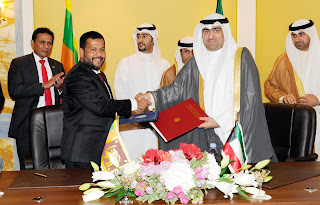 The second session of Kuwait-Sri Lanka Joint Ministerial Committee (JMC) held in Kuwait concluded on a “highly positive note” said the Department of Commerce of Sri Lanka (DoC) on 12 October. A bigger role for private sectors of both sides-with a pioneering Chamber to Chamber MoU -is now envisioned, according to DoC.

DoC states: “At the second session of the Kuwait-Sri Lanka Joint Ministerial Committee (JMC) on Trade and Technical Cooperation held in Kuwait from 9-11 October 2018 Ministers from both sides agreed to extend their fullest support to private sector entrepreneurs of the two countries for tangible results.

“In his welcome remarks Minister of Commerce & Industry of Kuwait Khaled Nasser Al-Roudan, stated that Kuwait Sri Lanka relations had always been cordial and mutually supportive. “JMC should be a useful platform to further enhance such relations while addressing any issues encountered by the private sector businesses of the two countries” he said.

“Delivering his opening remarks, Minister of Industry & Commerce of Sri Lanka Rishad Bathiudeen recalled the friendly and cordial relations between two countries. “The support extended by Kuwait to date are through funds on concessionary basis to develop irrigation, agriculture, education, power, energy and highways in Sri Lanka” he said and highlighted the importance of exploring untapped potential of both countries for the purpose of further enhancing their economic relations. The current value of two-way trade between Sri Lanka and Kuwait stands around US $ 50 Mn. While Sri Lanka’s exports to Kuwait averages closer to US $ 33 Mn., its imports from Kuwait remains about US $ 17 Mn. The key Sri Lankan exports to the Kuwaiti market include black tea, edible preparations, desiccated coconut & coconut milk powder, fruits & vegetables, foliaged plants/ cut flowers, etc. Meanwhile, Sri Lanka’s imports from Kuwait primarily include plastics and articles thereof, organic chemicals, paper & paperboard, mineral & chemical fertilizer, polymers of ethylene, etc. The number of tourist arrival from Kuwait stood around 4,300 in 2017. Kuwaiti investment in Sri Lanka remains insignificant at present.

“The JMC discussions focused on a wide range of cooperation areas such as trade, economic and financial, investment, labor & manpower, industry, tourism, agriculture and development. Both sides reaffirmed their commitment to further advance and consolidate Kuwait-Sri Lanka trade and economic ties through a number of initiatives that would involve closer engagement of the private sector. In this context, the two sides agreed to facilitate an MOU for strengthening cooperation between the Kuwaiti Chamber of Commerce and Industry and the National Chamber of Commerce of Sri Lanka. Nimal Karunatilake, Acting Additional Director General of the Department of Commerce headed the Sri Lanka side during the technical talks, while the Kuwaiti side was headed by Dr. Khaled Al-fathel, Undersecretary  of the Ministry of Commerce & Industry. Sri Lanka delegation, which was led by Minister Bathiudeen, comprised of H.E. B. Kaandeepan, Ambassador of Sri Lanka in Kuwait and senior officials from the Department of External Resources, Ministry of Foreign Affairs, Ministry of Megapolis and Western Development, Sri Lanka Bureau of Foreign Employment, Board of Investment of Sri Lanka and officials from the Embassy of Sri Lanka in Kuwait. Led by Al-Roudhan, the Kuwaiti delegation was represented by officials from Ministry of Foreign Affairs, Ministry of Finance, Ministry of Information, Public Authority for Manpower, Public Authority of Agriculture Affairs and Fish Resources, Public Authority for Industries, Kuwait Investment Authority, Chamber of Commerce and Industry and Kuwait Fund for Arab Economic Development.

“On the side-lines of the Joint Committee meeting, Minister Bathiudeen met his counterpart Kuwaiti Minister of Commerce & Industry, Kaled Nasser Al-Roudhan and the President of the Kuwait Chamber of Commerce & Industry, Ali M. Thunaian Al-Ghanim for separate discussions. The two Ministers highlighted the cordial relations that have been prevailing between the two countries over a long period of time and the mutual support extended during various international forums. Minister Bathiudeen stated that the development requirements of post conflict Sri Lanka provide many investment opportunities for countries such as Kuwait. He also said that the Joint Committee facilitated closer engagements between both policy makers as well as the private sector entrepreneurs of the two countries for the purpose of promoting mutual cooperation. The Kuwaiti Minister stated that his country was confident in investing in the Asian region which is full of resources and hard-working people. Both ministers agreed that the private sector should be given fullest support and encouragement possible in this context.

“The Sri Lankan Minister also invited his Kuwaiti counterpart to lead a Trade & Investment delegation to the island at an early date next year. During his meeting with the KCCI President, Minister Bathiudeen briefed him on the investment opportunities available in Sri Lanka with special emphasis on the infrastructure projects which fall within the purview of the Ministry of Megapolis and Western Region Development.

“The KCCI expressed their keen interest in investing in few identified projects in Sri Lanka as Joint Ventures. With the aim of providing a structed mechanism for fostering closer linkages between the business communities if the two countries it was agreed to conclude a Memorandum of Understanding between the National Chamber of Commerce of Sri Lanka and the Kuwaiti chamber of commerce of Industry prior to the next session of the Joint Committee.”