105 Scholarships granted by Faiszer Musthapha Foundation to empower our youth. 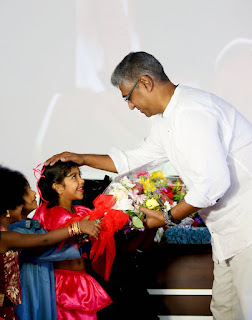 One of the main reasons for entering into politics is to give strength and light through educationto the poor children of the city and village stated Hon Minister Faiszer Musthapha.

He stated this at the program organized at the Duncan White Auditorium of the Sports Ministry to award scholarships to poor children through the Ape Daruwo scheme in honor of his 49th Birthday.( 2nd July 2018)

105 children who were successful at the O/ l were awarded scholarships through the "Ape Daruwo" Scholarships scheme under the Faiszer Musthapha social welfare fund. The Minister addressing the children and parents went on to state " My Father had the funds to provide a good education for me.  However my Grandfather is a poor child from a poor village from Maddawala. My Grandfather used to say that he walked 7 miles to school daily. He studied with great difficulties. In  that era it was a challenge for a rural youth to practice as a Lawyer in Kandy Courts. However my Grandfather succeeded in becoming one of the most outstanding lawyers in Kandy Courts.

Today two generations are enlightened because of my Grandfather's decision. That's why I want to share something with you children Education is the only weapon against poverty. Unfortunately our parents think that they cannot go forward due to poverty. We can conquer the world through education. We are ready to give you a hand. I have a great expectation to bring about this change through politics. "We provided scholarships through "Ape Daruwo" to 55 children and 45 of them have qualified for Universities. We must give our children the opportunity. Our children are capable. I am confident that we will able to produce Doctors and engineers from this group. I make one request from you that is you all can conquer the world. You must have the self confidence and you should work hard and be committed. To win in our lives we should be committed.

It is difficult to get a good education by going out with friends and having a good time. That is because there is big  competition to enter Universities. Other children are making huge efforts to win this competition and it will be necessary to be committed to succeed.

Dear Fathers and Mothers you children can succeed in the world.As parents you too should have self confidence. Give your children an education however difficult it may be. No one can take away your knowledge. As a politician I have a job in the event I go out of politics. If you have an education you need not be under anyone.

While obtaining an education we should also be religious. Some parents only give children an education and not religion. Children's character is formed by religion. The only difference between humans and animals is religion.


A I also thank Mr Roshan Mahanama who graced us with his presence as the Guest of Honour this morning.