‘Sri Lanka a hub in our Silk Road strategy’-China 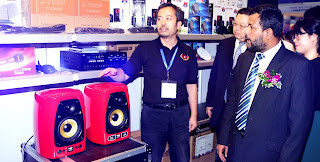 ‘Sri Lanka a hub in our Silk Road strategy’-China
·      ‘We both are people close to each other’- GZAR DoC Director Weihong
·      ‘Chinese FDI is 32% of last year totals’-Rishad
·      Says trade up by 46% in last five years, at $4.4 Bn
·Port City rising fast
PHOTO FILE>18MAY.jpg
Minister of Industry and Commerce Rishad Bathiudeen (right) is joined by Guangxi Zhuang Autonomous Region’s (GZAR) Director of Department of Commerce  Diao Weihong (second from left) at the launch event of 2018 Guanxhi Product Exhibition and China Guanxhi Brands Silk Road series in Colombo on 18 May.

China hinted Sri Lanka’s growing importance in its ambitious $500 Bn One Belt One Road (OBOR) initiative saying Sri Lanka a “hub” in its OBOR strategy. Sri Lanka meanwhile stressed of its own role in OBOR, and revealed that the Colombo Port City project despite the 25 year long timeline, is “progressing at great speed.”
“In OBOR, Sri Lanka a hub as per our strategy” said Guangxi Zhuang Autonomous Region’s (GZAR) Director of Department of Commerce  Diao Weihong on 18 May addressing the launch event of 2018 Guanxhi Product Exhibition and China Guanxhi Brands Silk Road series in Colombo. This is the largest Product Exhibition to be unveiled in Colombo by the provincial government of Guanxhi Zuang Autonomous Region (GZAR), with more than 60 companies from GZAR taking part. GZAR enjoys a very important position in the OBOR while previous Chinese travelers recorded that Guangxi had ties with Sri Lanka way back-2000 years ago.
“We both are people close to each other. Over the last few years China-Sri Lanka strategic partnership has been getting into the prime area and we are closer than ever before. Especially in OBOR, Sri Lanka a hub as per our strategy. We believe we can bring prosperity to both our countries” Weihong said.
Lankan Minister of Industry and Commerce Rishad Bathiudeen addressing the event, updated Sri Lanka’s contribution. “Sri Lanka is considered as a destination in the OBOR. The large scale Port City initiative which is progressing at great speed is expected to enhance Sri Lanka’s hub status in South Asia. Even though this is a 25 year long project the development work is moving at a fast phase” he said, and added: “Sri Lanka’s trade with China has been on a growing trend.  Last year's China Sri Lanka total bilateral trade was at $ 4.4 billion. This is a huge, 46% increase in comparison to trade total five years ago at $ 3 billion in 2013. With the completion of the proposed FTA with China, I am sure that these trade levels will grow in strength. As for the FTA, I am pleased to say that the consultations are progressing smoothly. China has also become a major FDI provider to Sri Lanka. In 2017, China provided more than 32% of Sri Lanka's annual FDI.  Chinese investments are mainly in infrastructure projects and strategic development projects. I am sure that with this week' announcement that China will be providing US $ one Billon for our central expressway project China's leading position as a major development partner of Sri Lanka is re-affirmed again.”
Earlier this month Reuters quoted a top Chinese construction official in Colombo who said “80% of the 269 hectare Port City site has now been reclaimed from the sea.”